OCIT Outstations interfaces use the Internet technology. They connect traffic controllers with central devices. Their task is the safe supply, the operation and monitoring of the device. This requires an immediate acknowledgement or error handling. Special meaning has therefore the transmission protocol BTPPL developed for OCIT Outstations 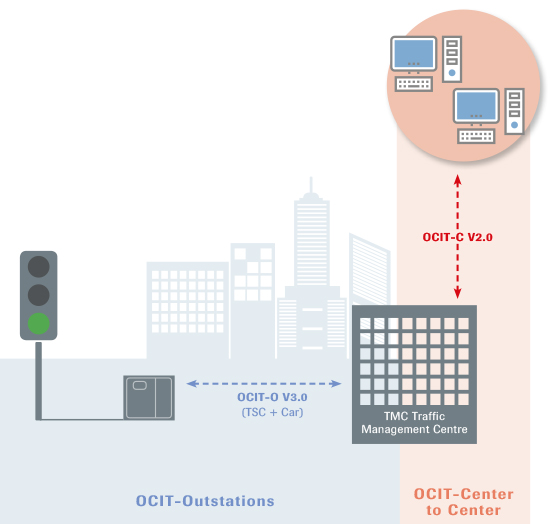 OCIT systems with OCIT Outstations interfaces transfer instructions and data only with the arrival of certain events. The synchronization of all devices in the system is made by exact clocks (radio clock or time service of the central device). 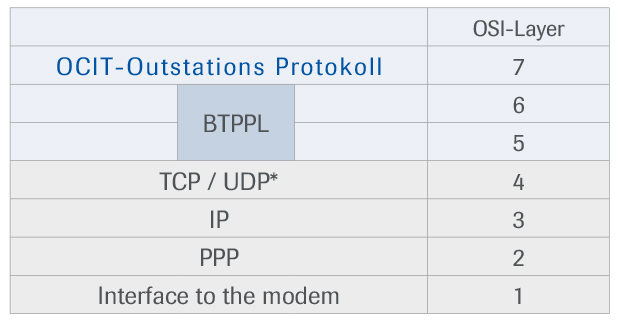 OSI layers of the transmission profile for point-to-point connections

Substantially smaller data overhead and shorter transmission times. Therefore still existing old 2-wire lines with bad transmission quality can be used. A firm component is the SHA-1-Algorithmus, which ensures by password protection a high transmission reliability by 24-bit-Codierung, so that hackers cannot manipulate the field devices.

All executable functions must be implemented by conformal devices in same way, in order to ensure a uniform system function. The exact specification of the objects takes place in the OCIT documents. The pertinent data definitions use the data description language XML (Extensible Markup Language). They are the basis for the implementation in the field devices. OCIT Outstations objects are fixed in the documents OCIT-O Basis and OCIT-O Lstg. They represent the standard.

With the help of the Member Nummbers a distinction between standard OCIT objects and the definitions of the manufacturers (manufacturer objects) is possible in the OCIT system.

Overview of the member number

With OCIT-O V3.0, the OCIT system provides integration with the cooperative radio-based infrastructure in the automotive sector. This makes it possible in the OCIT system.

to integrate into traffic management.

On one hand it is possible to transfer environmental notifications (DENM) from the central system into the vehicles. On the other hand it is possible to acquire, filter environmental notifications from the vehicles and transfer them to the central system. Thus the operator has an overview of the current traffic situation.
The moving traffic is acquired with CAMs. This data is transferred to a central system after aggregation and processing. For the prioritization of public transport, the messages CAM (registration) and SPaT (acknowledgment) are used.

OCIT-O for traffic controllers version 2.0 is the upgrade of the existing OCIT-O definitions with version 1.1. The characteristic system functions of Version 2.0 are

Practical experiences led to a set of improvements and new definitions. OCIT-O for version 2.0 is backwards compatibly to OCIT-O V1.x. Central devices with version 2.0 covers therefore also all functions of the version 1.x.